A teacher recently told me about some research that has been done in to the number of words children from different backgrounds will have heard by the age of three. It suggests that there is a huge gap between children from the wealthiest and poorest families. As the amount of words a child is exposed to influences their language development this is obviously an important consideration.

Part of our discussion focussed on the fact that it would be easy to look at the stereotype of a professional family providing more language than a working class family. However, this is not always the case. The professional family may have little time to spend with their children who could spend a lot of time in child care. It is also important to consider the quality of communication. A child may hear lots of words from the television but interaction with an adult would be more important.

Many of the apps that can be used to learn mouse control also require children to do something else e.g. answer a sum, recognise words or letters… I’ve chosen some of the more basic ones that could be used with the youngest children.

Mouse Skills Resources – links to a few games that support children who are learning about what happens when they move the mouse, to learning how to click and click and drag. http://www.internet4classrooms.com/early_childhood/mouse_skills_pre-k.htm

Jigsaw Game – click and drag to complete a jigsaw:  http://www.meddybemps.com/halloween/piratepuzzle.html

Popping the balloons – click on the balloons to pop them, children need to count to (or backwards from) 10 and recognised the numbers to get it right.  http://www.sheppardsoftware.com/mathgames/earlymath/BalloonCount10.htm

Town Trail –  a resource based on Knowledge and Understanding of the World, the resource includes a range of activities including mouse control. http://www.northerngrid.org/content/town_trail/ttrail.html

The Berenstain Bears Dress up – learn mouse control by dressing the bears.  http://pbskids.org/berenstainbears/games/dress/index.html

Funbloks – create a building by moving the blocks. You can change the background and the blocks. http://www.fungooms.com/Funbloks/index.html

Northern Grid Senswitcher – designed for children with profound and multiple learning difficulties it progresses from  the child observing what happens on the screen, to clicking the mouse or space bar once to start an animation, to clicking more than once, to clicking at the right time. This may be useful for some early years children. http://www.northerngrid.org/senswitcher/

At the last meeting of the research group we talked about the work of Professor Sugata Mitra.

As part of his research he provided children in India with a computer in the wall that they were left to use on their own. He found that the children could learn to use it without adult support. He is now working in Newcastle and doing projects in this country including projects involving SOLE, Self Organised Learning Environments. Adults support children to identify a question, the children are then left to work together using computers to find out the answers for themselves. He has also supported the development of a granny cloud, linking children to adults who provide support to children but not formal teaching.

It’s been a very long time since I mentioned him on my blog so I thought I’d better flag up the previous posts:

I was asked recently to suggest some apps and websites for a preschool to use to develop children’s mouse skills. They only have an old PC with limited internet access but one resource that immediately came to mind was Poisson Rouge, This site used to be free, now it’s mostly paid for but there are still some parts that you can access if you click on “free content”. There is no reading for the children to do just lots of things to explore. It includes using the mouse for clicking, click and drag, click on the right spot…

Is it appropriate to use technology in early years?

You don’t need to look far to find a wide range of stories in the media about whether it is is appropriate for very young children to use technology.There are probably about as many stories warning against the use of technology as there are describing the potential benefits. This dichotomy is evident in research literature too.

I presented at a couple of early years conferences recently and used the table below to challenge the audiences to think about the reasons to use technology with young children as opposed to the reasons not to. You may want to think about where you would put each of the different items. 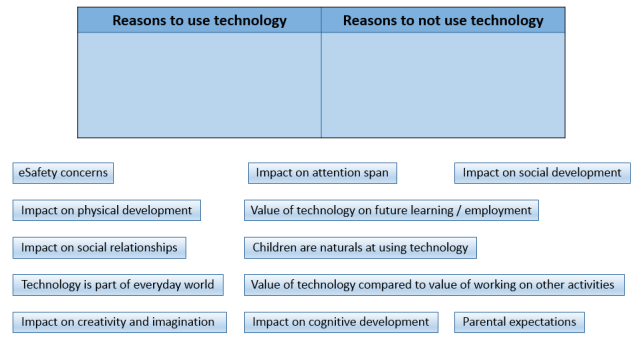 For me the answer is:

It depends…  on the device, the activity, the support…..

Most reasons can be put on both sides.

Fool’s Gold, a report published in 2000 by Cordes and Miller, is referred to extensively and is highly critical of young children using technology. The concerns they identified included:

However, a literature review published in 2007 by McCarrick & Li  identified as much positive evidence for using technology as negative.

While children can sit at devices on their own, focused solely on what they are doing, technology can also be used by groups of children working together leading to many social interactions with peers and teachers. Similarly while technology can be used in unimaginative ways, such as drill and practice tasks, modern devices can be used very creatively. It is important to recognise that early studies tended to focus specifically on the use of computers. Technology is now seen to be much broader than that.

Of course it is possible to use any technology badly and it is important to start with your priorities and what you want children to do or learn. For me the question needs to move from:

“Is technology appropriate in early years teaching and learning?”

“I want to provide activities that support … collaboration… creativity…how can technology help me achieve this?”